Thank you to all of our competitors, arbiters, organisers and special VIP Guests for helping to make this the best World Memory Championships EVER!! 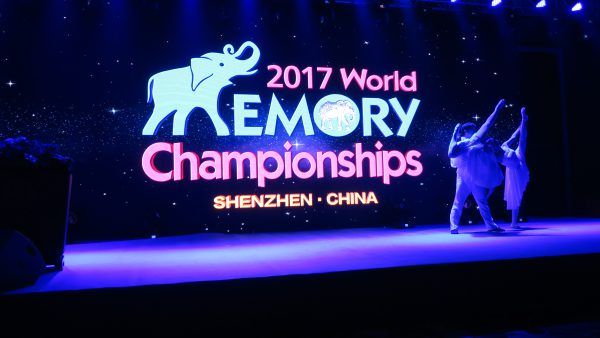 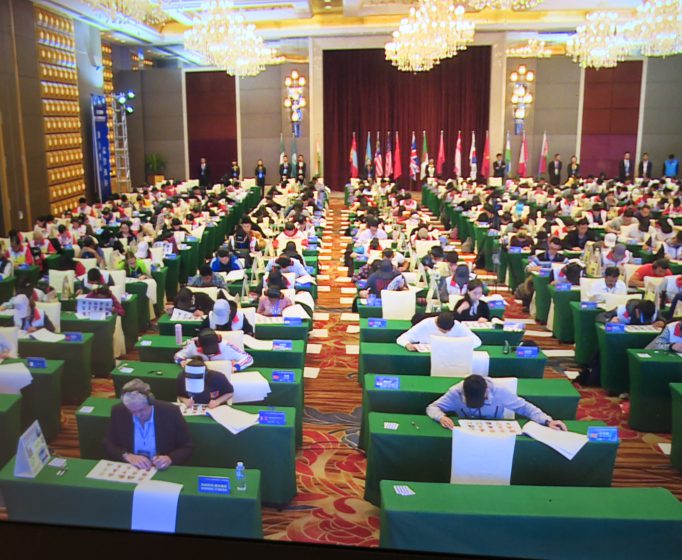 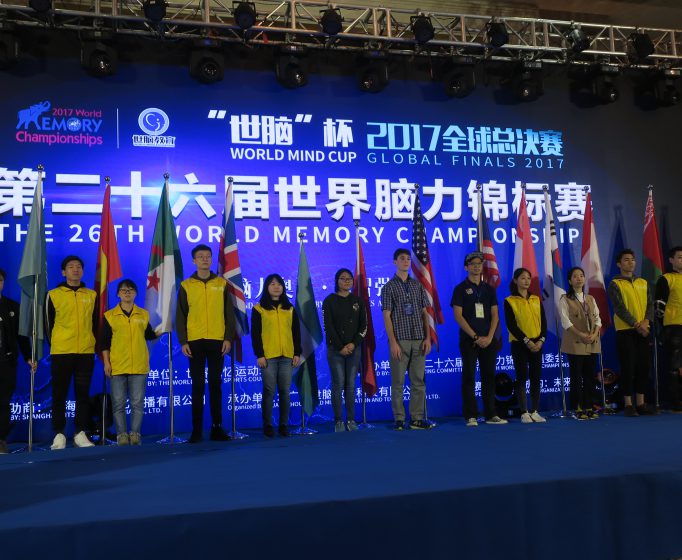 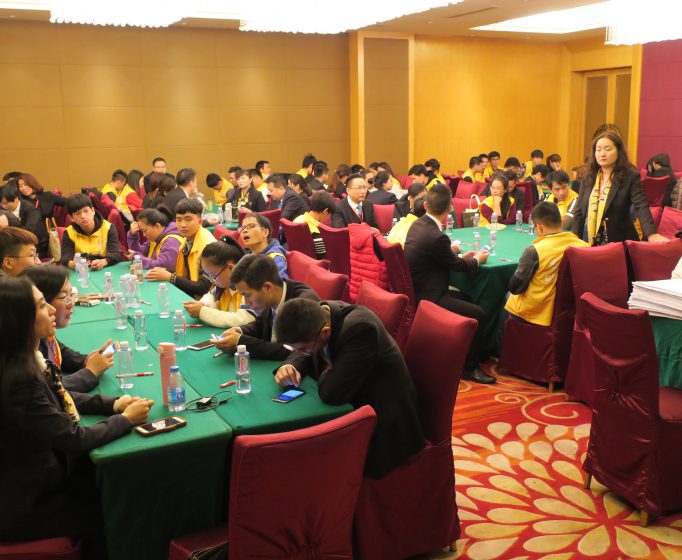 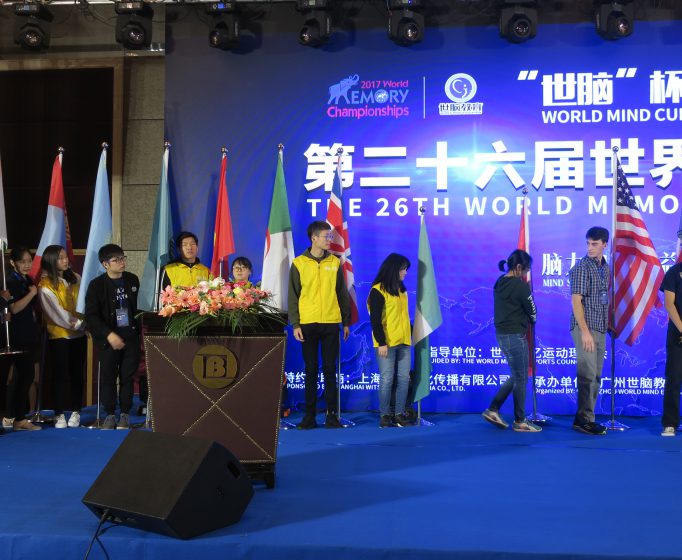 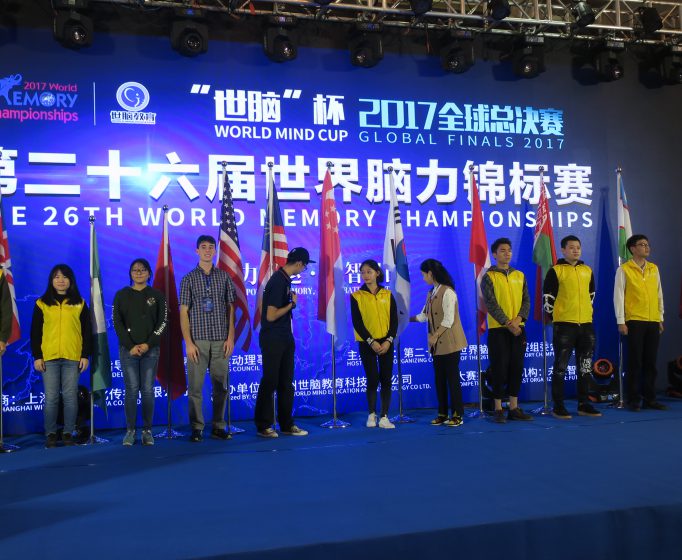 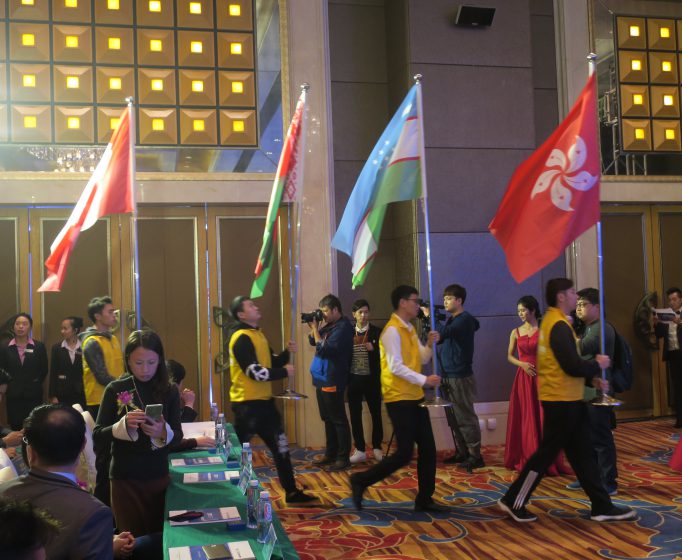 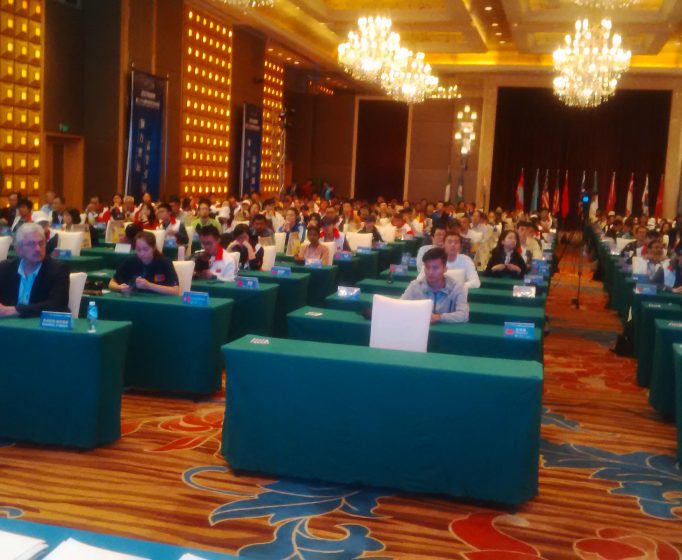 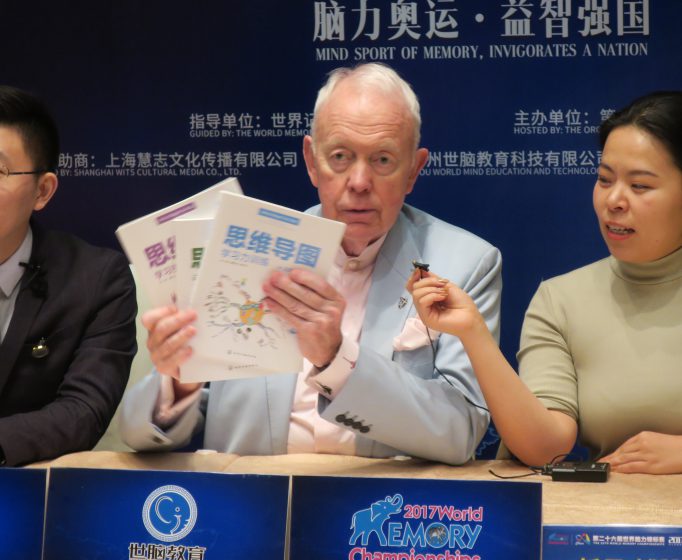 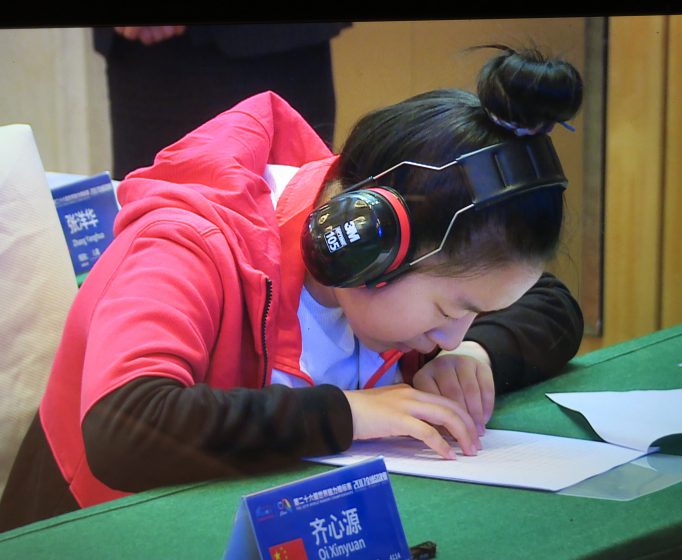 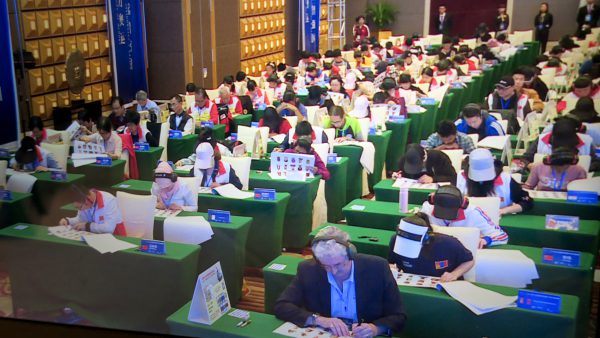 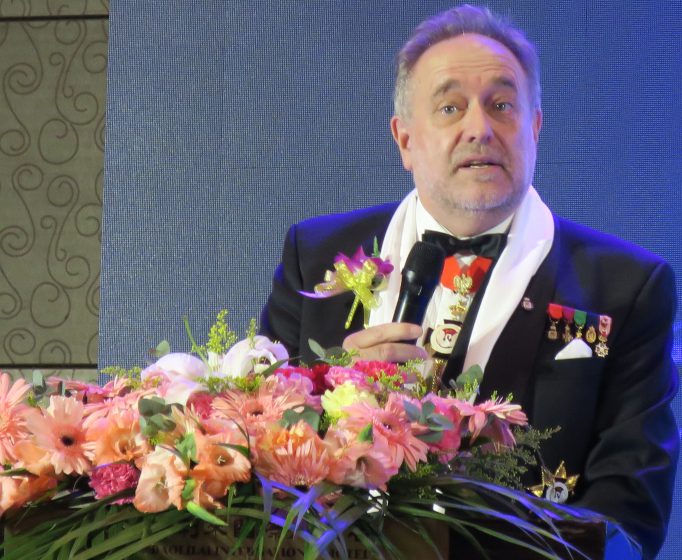 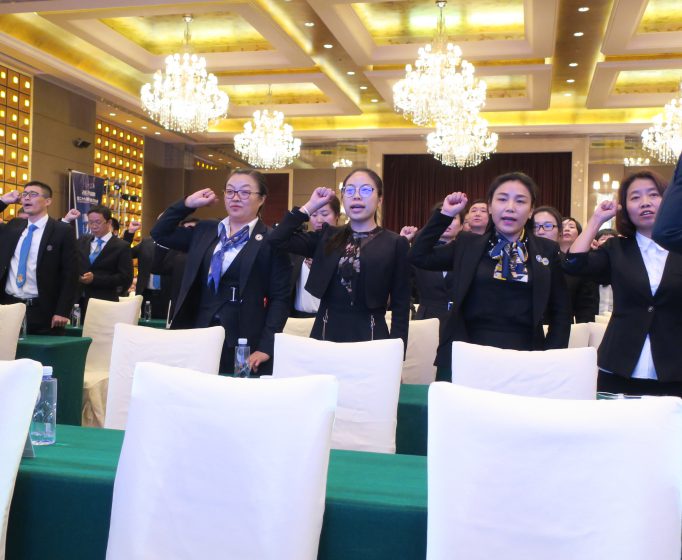 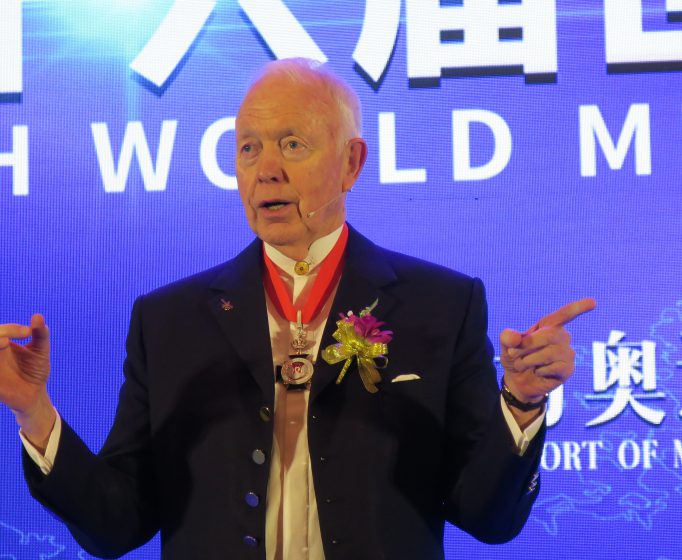 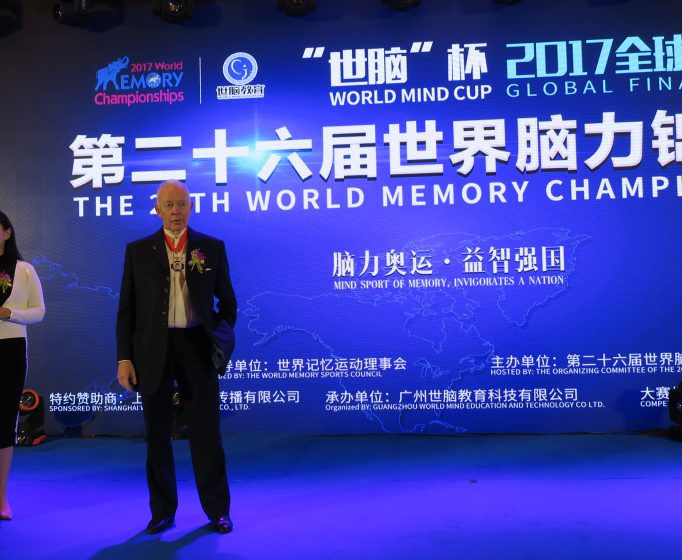 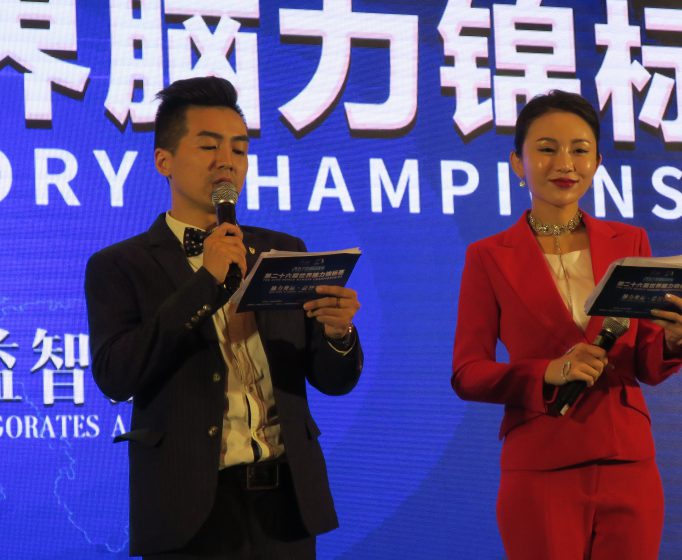 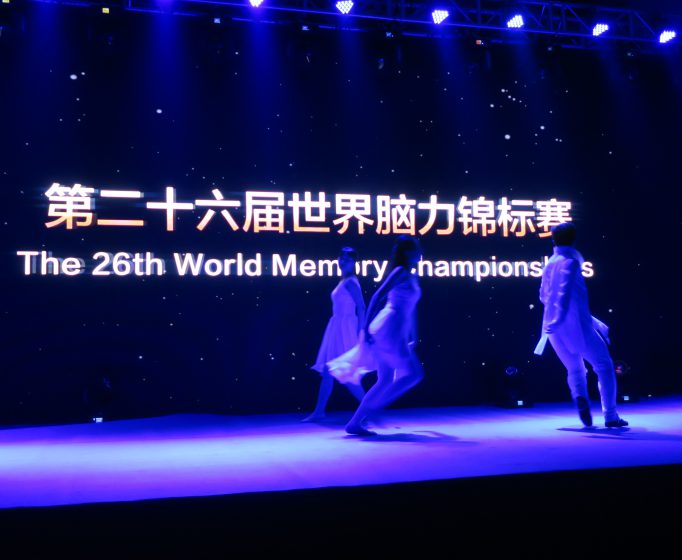 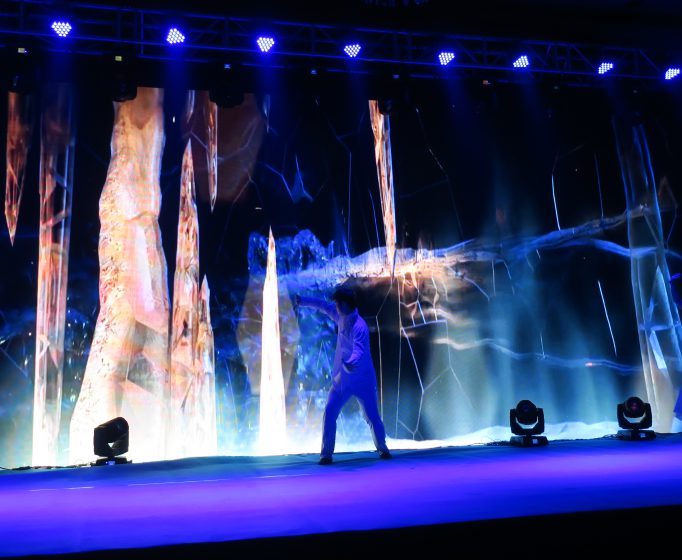 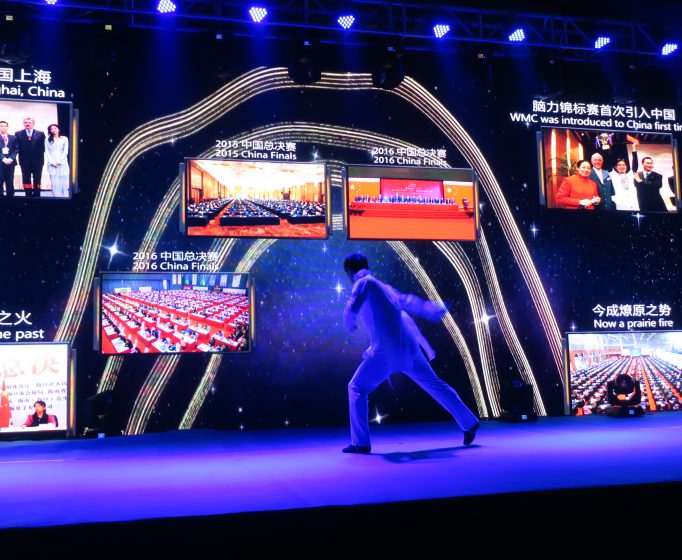 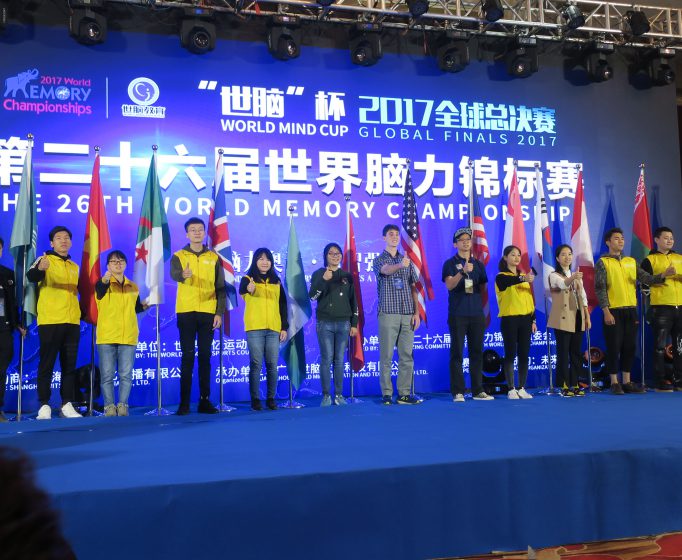 The twenty sixth world memory championship which finished last night in the city of Shenzhen, PRC, will go down in the history of Mind Sports as the best ever….so far. The championship was marked by a number of truly memorable elements…a magnificent $100,000 US dollar prize fund, a shattering of the speed cards record , bringing down the time taken to correctly recall a shuffled deck of cards to a level which nobody had remotely predicted. Finally, most historic of all, the first victory by a female contestant in the twenty six years of the championship. To think that an 18 year old girl might topple the male Titans of memory , would have been virtually inconceivable before the competition began. Now it has happened, proving in the process that Memory Sport truly knows no boundaries of gender, age or physical strength.

And then there was the return of that male Titan of memory, Dominic O Brien. Having won the main championship title a record eight times, Dominic now returned to capture his first senior ‎victory.

On the team front China dominated, followed as expected by Mongolia, with their supercharged team of teenage girls. Bronze resulted in a stand off between Algeria and Malaysia, a triumph for the former, whose team will be welcomed by state recognition on their return home.

An overwhelming fact struck me during the championship, ‎that the young people who take up early memory training are forming a race of superhumans…more intelligent, more poised, more self confident and more dynamic. Memory training truly revives the classical ideal of mens sana in corpore sano.

The tide of history is on the side of the brilliant young WMSC champions‎. I now challenge the old guard who were too scared to face the new wave to enter next years 27th World Championship and test their skills against the dynamic younger generation. If they lack the courage, the tsunami of the future will overwhelm their fading laurels…with the exception, of course, of the Immortal Dominic O Brien!

The 26th World Memory Championships  has proved, once again, that we continue to underestimate what the brain is capable of.  The top story is the new World Record for memorising one randomly shuffled pack of cards has been slashed to just 13.956 seconds by Zhou Lujian of Team China knocking 1.654 seconds from previous World Champion Alex Mullen of the USA. This now becomes the new Guinness World Record.

The World Records that have been broken during in the ten separate memory tests over three days, it is worth remembering that none of the competitors were born with any special memory gifts or have any special qualities. They are all ordinary mental athletes who are using very simple techniques to enable their brains to memorise seemingly impossible amounts of information, and to recall them accurately against the clock. With enough practice, anyone can do the same.

Unlike some physical sports, which can take years to reach world level, in the Mind Sport of Memory we have seen new competitors go from a standing start to becoming a World Champion is under two years!

So what is it all about?  It is not a quiz and has nothing to do will cramming your brain full of random facts. Instead it is all about the ability to be presented with new information – such as list of numbers, dates, names and faces, words or playing cards, and seeing how many you can commit to memory in a specific length of time. Then, in a fixed period of time, accurate recalling that same information. It has to be 100% accurate as there are no prizes for forgetting.

The sport, as indeed it is, was founded by Tony Buzan, author and inventor of Mind Mapping, and Raymond Keene OBE, the Chess Grand Master and is now practiced in 62 countries. The highest achieving competitors in the qualifying rounds are eligible to compete in the World Championships.

This year the event took place in China and has in the past been in London, Oxford, Manchester, Bahrain, Kuala Lumpur, Singapore, Hainan, Guangzhou, Croydon, Chengdu and now Shenzhen. Bids are open to host the 27th World Championships in 2018. A great incentive this years was a prize fund of US$100,000 which was distributed around the winners.

The Sport has also attracted Royal patronage. Prince Philipp von und zu Liechtenstein, who graced the front page of the South China Morning Post as soon as he arrive in Shenzhen. granted the first Grandmaster of Memory titles by royal decree at Hanbury Manor UK over two decades ago, thus helping to fuel and launch the now burgeoning world memory movement.

Prince Marek and Princess Petrina Kaspersky of the Polish Royal house, are presidents of the World memory sports Council in Australia and also edit the magazine of The Brain Trust Charity, Synapsia.

This year the competitions was organised by David Zhang, the President for the WMSC Asia Pacific region and was sponsored by Shanghai Wits Publishing Ltd and Guangzhou World Mind Education and Technology Ltd.

(1) A stopwatch or a speedcube timer (The brand appointed: Speed Stacks. Types: The third generation or the fourth generation);

(2) Ordinary cards: 4 packs of cards for Speed Cards (There’re 2 rounds and please organize 2 packs for recall in order and then hand in). The number of cards for Random Cards or One Hour Cards is determined by the number of challenges. Please label cards with label paper and plastic bags offered at the sign-in site. (P.S. The label of Speed Cards includes: 1. memory 2. recall 1. memory 2. One Hour Cards and players’ name. ) Speed Cards and Random Cards should be put into bags and given to the registration staff;

(3) A transparent ruler which is 3cm wide and 30cm long; a pencil; a roller pen; a writing pad (Tables in the game are covered with tablecloth); Earphones or earplugs (It depends on players’ needs);

(5) A 2-inch color photo (the background color is not limited) which will be used to make entry card.

(1) Players are required to volunteer for the game;

(2) Everyone must be inspected on reaching. A player’s participation certificate is a must when entering, and is only valid for the player himself. Any electronic products except for equipment required such as cellphone and electronic watch are forbidden;

(3) Players must write down their name, group and table number. Paper without name will be considered invalid;

(4) Players must be present 15 minutes before the game starts. Those are 5 minutes or longer late are not allowed to enter;

(5) Players’ places will be arranged by the chief referee and players shall not change their designated places at will;

(6) Players must obey Competition Management’ arrangement and the rules of the game;

(7) At the avenue, please obey following requirements: No talking loudly; No shaking tables and chairs; No shaking bodies frequently; No tapping; or other behaviors of disturbing others. If players have any questions, they should be sure to signal the referee by raising hands and whisper to him after he approaches;

(8)In case any player is not satisfied with the results, he should fill in the result-check application form, hand it in to the assistant referee to review and wait for reply;

(9) Players who participate in the Chinese game must dress the uniform required by the Competition Management and mustn’t wear clothes carrying other organizations’ logos or wear any article with such logos during the opening ceremony, closing ceremony and the game. Players mustn’t take photos for organizations not authorized by means of banners, plates, etc.;

(10) Players who are against the rules shall be disqualified and the participation results shall be cancelled; Players who cheat in the game shall be criticized in a circulated notice in their work units and be banned to participate in this competition forever.

Distribution of the Prize Fund

PS: If you are   required to submit an official invitation which provided by the foreign affairs office of Chinese government (it usually contains a bar code), we are so sorry to say it goes beyond our ability to deal with, we suggest you can ask for help from your local travel agency or visa agent company.

About 15 km from the distance, 20 minutes by taxi. 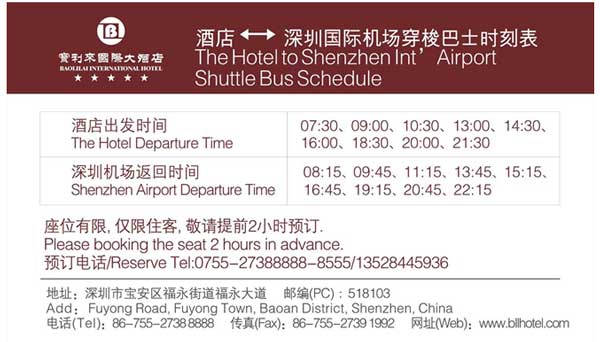 Shenzhen Baolilai International Hotel is about 15 km from Shenzhen Baoan International Airport and Fuyong Harbour, Baolilai International Hotel offers an indoor pool, tennis courts and a modern gym. The hotel has 502 luxurious rooms of various styles. Modern and elegant, the large air-conditioned rooms are fitted with free wired internet and a flat-screen TV. A minibar, electric kettle and personal safe are included. Bathrooms have a bathtub and hairdryer. Free Wi-Fi and foreign network line is available in all areas.

Guests can dine at 4 restaurants and party or sing karaoke at the on-site night club. Enjoying views of the city, Phoenix Court Revolving Restaurant serves international buffet spreads which is the only one revolving restaurant in Bao’an District. Other dining options include Nansen Chinese Restaurant, Fukujima Japanese Restaurant and Sialan Western Restaurant.

Shenzhen Baolilai International Hotel is less than 43 km from Dongmen Pedestrian Street and Gaojiao Exhibition Centre. It is 50 km from Luohu Railway Station and Luohu Harbour. Free parking is available.

Baolilai International Hotel has especially invited Chef Liang Deguang-“god of kitchen in the world” to be in charge of cooking and offers high-grade and famous Cantonese and Hong Kong dishes to guests from all over the world. The hotel has graceful and noble banquet hall, elegantly-decorated Chinese restaurant, elegant and exquisite western restaurant, pure local Japanese cuisine restaurant and 41 Chinese deluxe booths. Baolilai International Hotel can satisfy various demands, no matter business banquets, family parties, different meetings or banquets.

Book a room with our official website(www.bllhotel.com) or Wechat, enjoy the rights to have these benefits： 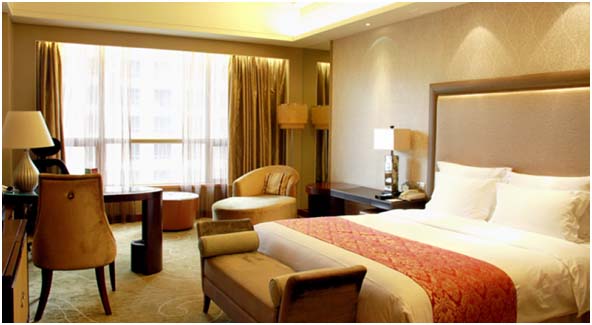 Register to compete in the 2017 WMC

On the 10th of January the press conference took place in the Beijing National Convention Centre to launch the countdown to the 2017 World Memory Championship with over 200 people in attendance .

Present at the event was the global president Raymond Keene OBE and the eight times World Memory Champion Dominic O’Brien, David Zhang the president of the Asia Pacific Region of the World Memory Sports Council, the media, sponsors, and members of the organising team.

This will be the 26th World Memory Championship since the sport was founded by Tony Buzan and Raymond Keene in 1991. 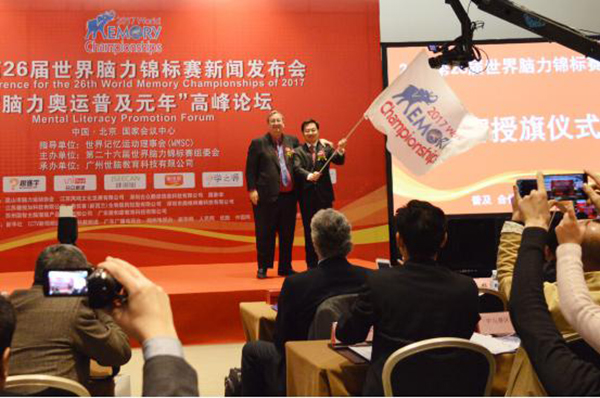 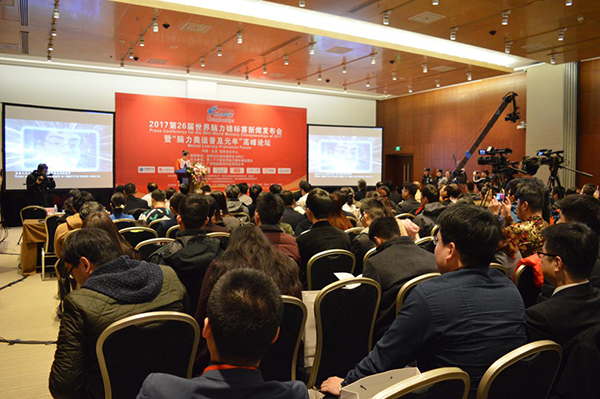 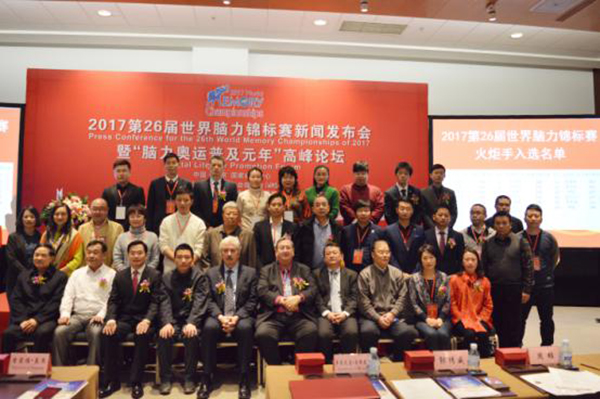 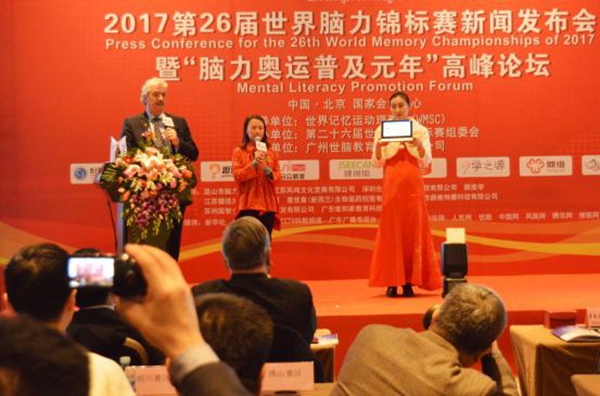