Before Alex Mullen competed in—and won—the World Memory Championships, this past December, no American had ever placed higher than seventh. Photograph by Jonno Rattman for The New Yorker

On the Saturday before Mother’s Day, Alex Mullen, the country’s top-ranked memory athlete, joined his parents and grandmother for dinner at a restaurant near his grandmother’s home, in Easton, Pennsylvania. Earlier that day, Mullen had been in Hershey, Pennsylvania, ninety miles west of Easton, where he had competed in the U.S.A. Memory Championship and set two new national records, in speed cards and speed numbers. To set the speed-numbers record, he had memorized more than five hundred and fifty sequenced digits in five minutes. 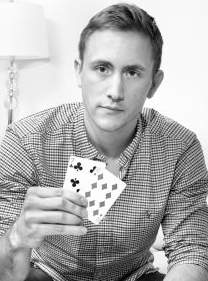 As the family lingered at the table after the meal, Mullen challenged his grandmother to memorize a list of ten words. He rattled them off for her: cherry, coffee, flower, candy cane, scarecrow, dragon, pasta sauce, Coke can, ghost, and Hershey’s Kiss.

“I’m not doing that—I can’t do that!” she protested. He assured her that she could. All she had to do was create a memory palace—a familiar spatial setting, full of recognizable details, in which image-based associations of the information being memorized could be placed in a unique and hopefully unforgettable fashion. Alex told his grandmother to imagine walking through her house. “Put a cherry at your front door, a bunch of coffee grinds all over your couch,” he told her. “Make your kitchen table a flower.” She retraced her steps through her memory palace, working through the clues Mullen had placed there. On her first try, she recited back eight of the ten words on Mullen’s list.

“No one is going to remember a random number or a random list of words,” Mullen told me. “It’s really all about taking things that don’t make any sense and giving them some sort of strong visual meaning. People are much better at remembering those sorts of things.”

Mullen is twenty-four years old and six foot one, with yardstick-wide shoulders and close-cropped hair. He wouldn’t look out of place on a college lacrosse team. He first learned about advanced memory techniques in 2013, during his junior year at Johns Hopkins, when he read the book “Moonwalking with Einstein,” by Joshua Foer, in which Foer chronicled his experiences as a memory athlete.

“I think he saw it as a nice distraction from school,” his father told me. “It was a healthy break, to let his mind go.” Mullen began practicing competition-style memory tasks during his senior year, and in March 2014 he entered his first national competition, the U.S.A. Memory Championship, where he placed second. After college, Mullen enrolled in medical school at the University of Mississippi, and began applying memory techniques to his studies, while continuing to practice for competition. “I started falling in love with the challenge—getting faster,” he said. Something nagged at Mullen, though. He noticed that whenever he was forced to take time off from practicing—even if it was just a few days—his skills would dull. “I was not into the idea of losing progress, so I just never stopped,” he said. “It became kind of an addiction.” In the spring of 2015, he competed in his second U.S.A. Memory Championship, the Extreme Memory Tournament, and the Memory Athletes Association U.S. Memory Open. He placed fourth in all three tournaments.

Earlier this month, Mullen broke both domestic and international records in speed cards, memorizing the order of a deck in 18.65 seconds. Photograph by Jonno Rattman for The New Yorker

By last summer, Mullen was practicing more advanced memorization techniques. One technique, called the Major System, builds on the mental-palace structure by incorporating a phonetic code: every number is translated into either a specific letter or sound. “Seven is a ‘guh’ sound. Three is an ‘muh’ sound. Two is a ‘nuh’ sound. Guh, muh, nuh,” Mullen explained. “You sort of just squeeze those together and make some sort of word that has those consonant sounds. For me, seven-three-two turns into ‘gaming.’ So seven-three-two is a gaming control, like an Xbox controller. That’s how I go from seven-three-two to the Xbox controller.” Using the Major System, Mullen has chosen visual objects to represent any three-digit combination. Six-two-seven is John Goodman. Six-six-six is a trumpet spewing out smoke. The list goes on. During competitions, Mullen places these visual objects in his mental palaces: either his parents’ home, in Oxford, Mississippi, his college dorm room, or various spots on his medical-school campus. Within each mental palace are specific locations, called loci, which memory athletes use to increase accuracy and distinguish order. Loci can be simple things: the brick steps leading to a house’s front door, the mudroom bench, the couch in the living room. If Mullen wants to memorize a sheet of five hundred numbers, and the first six digits run 627666, he can place John Goodman playing a smoke-spewing trumpet on one of these loci and move on. The same method can be used to memorize the order of playing cards, or anything else.

This past December, Mullen travelled to Chengdu, China, for the World Memory Championships. He and his wife, Cathy Chen, who was also in medical school at the University of Mississippi, had taken their end of semester exams early to make the trip. “We each took two exams on Monday, two on Tuesday, and then packed all night,” Chen said. “At three in the morning I gave him a haircut. He took a shower and I made some pasta and we went straight to the airport.” Mullen arrived in China with a growing reputation on the memory circuit, but no one expected him to win the tournament. International memory competitions have for years been dominated by memory athletes from England and Germany (and, more recently, Sweden and China), and no American had ever placed higher than seventh at the world championships.

But as the competition—ten events held over three days—got under way, Mullen quickly leapt into second place on the leaderboard, and stayed there. He broke one world record by memorizing three thousand and twenty-nine digits in an hour, as well as the U.S. records for cards memorized in an hour (twenty-eight decks and four cards), binary code memorized in thirty minutes (three thousand eight hundred and eighty-five digits), and abstract images in fifteen minutes (five hundred and five shapes). The crowd was stunned. An American was making a run for it.

The final event of the tournament was speed cards—Mullen’s specialty. Mullen needed to memorize a deck in under twenty-three seconds to win the whole tournament. He did it in 21.5 seconds, becoming the first American world champion in the history of the sport and taking home the forty-thousand-dollar grand prize—“thirty-two thousand after taxes,” he told me—also the sport’s largest prize to date.

After his showing in Chengdu, Mullen was arguably the best memory athlete in the world. (Because of a quirk in the scoring system, he is currently ranked second in the world by the World Memory Sports Council.) He had some decisions to make. He was two years into medical school, but he was tempted to try his luck in the world of applied memory techniques. “I wanted to put more effort into it and try to do speaking engagements and build coaching opportunities and try to promote the techniques specifically for learning applications rather than competition,” Mullen said. Other memory-blessed individuals have made lucrative careers out of their particular skills. Ron White, who won the U.S.A. Memory Championship in 2009 and 2010, for example, gives presentations on memory to dozens of corporate clients a year, and charges a speaking fee of twelve thousand dollars. Did Mullen want that kind of life?

His wife helped him put together a Web site and film tutorials, and they decided that, after the spring term ended, they would both take a year off from school to devote themselves to the memory business as a team. Medical school wasn’t going anywhere. Plus, all this memory stuff made Mullen happy. (Chen also wanted to put time into Read Record Replay, a nonprofit she founded focussed on child illiteracy.) “This is really the only opportunity we have to take time off to try this out,” Mullen said. “It’s basically now or never.”

Mullen’s year off began earlier this month, when he flew to Pennsylvania for the U.S.A. Memory Championship. He caught an early break when the reigning champion, Nelson Dellis, opted out of the contest so that he could climb Mount Everest. “That made things easier for me,” Mullen said.

The tournament, held on May 7th at a hotel convention center, was split into two sessions. Four events would be held in the morning: names and faces, speed numbers, poetry recall, and speed cards. The top nine competitors from the morning would then advance to a three-event afternoon session. In the morning, Mullen won names and faces, speed numbers, and speed cards. In speed cards, he broke both domestic and international records, memorizing the order of a deck in 18.65 seconds. The second-place finisher took one minute and fifty-two seconds.

The afternoon round offered a twist. Instead of writing out the material they’d memorized, the athletes would recite the information aloud, onstage, in front of an audience. Sitting in a row of chairs, the finalists would take turns reciting the information. If their turn came and they flubbed something, they’d be eliminated from the competition.

In the first round, the athletes were asked to recall a list of two hundred words. Four competitors were eliminated, and Mullen survived. For the second round, a “tea party,” six actors came on the stage and listed fictional facts about themselves, including their names, home towns, phone numbers, birthdays, favorite foods, favorite hobbies, and favorite pets. The remaining five athletes were then asked to recall certain facts about each of the actors. Two more competitors came up short.

In the final round, the remaining three athletes—Mullen, a forty-six-year-old dentist from Tennessee, and a high-school student from Hershey—were asked to memorize two decks of cards. The competitors were then asked, one at a time, to name the next card in the sequence. The high-school student was eliminated about thirty cards in. The dentist got to the seventy-fifth card before making a mistake—it was not the jack of diamonds. Mullen provided the correct answer: “Seven of clubs.” As the judge declared him the winner, Mullen lingered in his mental palace. It was his college rec center, back at Johns Hopkins. He closed his eyes and took a second look at the image that had brought him to victory: the Notorious B.I.G., sitting on a television, holding the skull of his worst enemy.

Ian Frisch is a journalist and editor in Brooklyn.