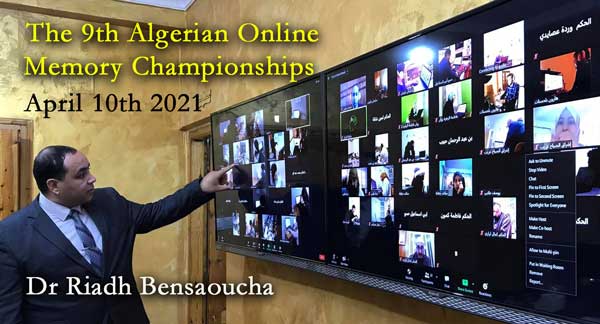 View the scores of the 9th Algerian Championships

All the 10 Arbiter participated in an Online training course on arbitration presented by Mr. Ahmed Lamine Chala on March 26th, in addition to the Arbiters team, there was a team of technicians and administrators who participated in the success of the championship.

In this championship we have 24 competitors: 15 females, 9 males, 23 from Algeria and one from Saudi Arabia, and the composition of the competitors was as follows: 10 Adults competitors, 9 Juniors, 5 Kids, 4 of the participan’s Previously participated in memory championships, the rest are new participants.

After publishing the videos, which are considered as an online closing ceremony of the championship, An email was sent to all the participants containing the certificates of participation, certificates of new Arab records, certificates of first ranks in various categories, and a national master’s certificate. Financial prizes were also transferred to the winners and coordination was made with them to send medals And cups.

The general shape of this championship is completely different from all previous championships and this is the result of the global health situation that the Corona epidemic negatively affected, and that’s what forced us to have an online championship and an online closing ceremony too, but one of the beautiful things in this championship is that now we have an online simulation experience of the memory events, and our website has become able to generate events from a huge database that the site contains, and the correction is in the highest degree of accuracy based on the correction rules adopted by the World Memory Sports Council, and the site has successfully passed all the accuracy tests of correction.
During a full 5 months before the online championship date, a coordination was made continuously with the champions in various Arab countries to go through the online events and provide all observations for development and improvement, and their suggestions were approved until we reached the best user experience on the site based on the opinion of the memory champions in Arab world.

After that, a new stage came, which is the stage of developing the site in order to organize an online memory championship, and the site was developed to support the repeated interruptions in the Internet that may occur in the competitors’ computers even if the period of repeated interruptions reached 5 full minutes each time without affecting in any way the results of the participants in the championship! After this was completed, coordination was made with the candidates to participate in the online Algeria Memory Championship in order to participate in 6 experimental national championships before the date of the real championship, where 3 of them were short championships of 37 minutes duration, and 3 of them were full-day. These experimental championships were considered as training for the participants to be technically prepared in order to adhere to the rules of online competition, which were sent to them through the detailed guide to compete online, and these championships were also considered as a psychological preparation for them for this new experience, in each championship they were presented with new events to assure them that in a real championship there will also a new events.