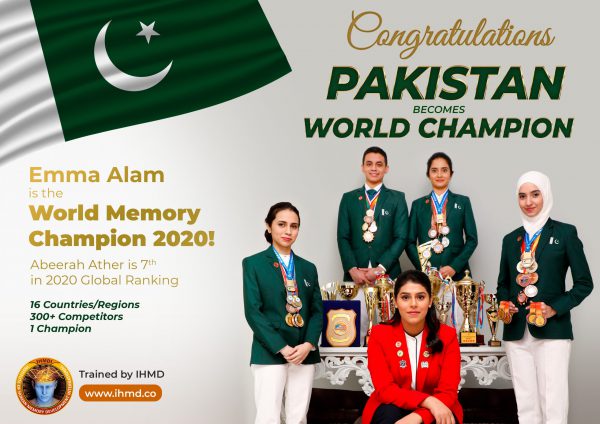 The World Memory Championship was founded jointly by myself and Tony Buzan, famed inventor of Mind Maps , at London in 1991. Since then the championship has grown from just a handful of competitors from just one country, to an event of global dimension with many hundreds of entrants and numerous participants from a huge number of different nations. The main point of the championship was to offer a new field of endeavour , in which to display the limitless frontiers of the human brain.

So far , so good. However, the year 2020 turned out to be different, so different in fact that , due to the Coronavirus, virtually every major sporting and cultural event across the planet had to be cancelled. Such cancellations and postponements included the world chess championship , Wimbledon tennis grand slam, The Tokyo Olympics, The London Promenade Concerts, and the abolition of public attendance at football matches. Even Christmas and New Year celebrations were put on hold as a result of The Pandemic.

The one shining exception was the 29th world memory championship, which by a miracle of organisation and global coordination, was successfully put together by our dedicated team, with the Chinese City of SANYA as its base.

My congratulations go to everyone involved in this marvellous feat and especially Chief Arbiter Lester He.

The field consisted of an impressive 300 competitors from 16 countries and from this extensive field the winner , world champion from the 29th World Memory Championship , emerged from the Pakistan team, so excellently and expertly trained by Sania Alam.

In achieving their success Sania and the new champion employed those characteristics of Genius identified and described in Buzan’s Book of Genius. Such qualities include determination, vision, perseverance and persistence.

So congratulations to Emma Alam , one of the great sporting achievers for Pakistan, a unique heroine in Pandemic stricken 2020 , and supreme grand world memory champion for 2020.

The 29th World Memory Championships ONline- Global Finals has ended on 20th December 2020. 16 countries and regions have participated in the competition via sub-venues, competed over 10 disciplines in 3-days competition.
Due to ongoing coronavirus outbreak, we are unable to gather competitors around the world and compete in the same country this year, but with the efforts of WMSC, APMSC and the global chief arbiter Lester He, the World Memory Championships has adopted online and synchronous mode, had the competitors compete synchronously in 16 countries and regions.

We had 16 countries and regions, more than 300 competitors participated in championships. They are from China, Canada, the United Kingdom, South Korea, Vietnam, India, Malaysia, Algeria, Pakistan, the United States, Hong Kong(China)， Macau(China), Taiwan(China), Libya, Qatar and Iraq. The best and the brightest candidates competed to demonstrate their intellectual power and to test the limits of memory.

There were more than 200 competitors from China. With the oldest of 72 years old and the youngest of 8 years old. There were not only teachers and students like Zhang Xingrong and Zhou Shidong, but also mother and son like Hu Wenjing and Zhang Pinyuan that trained and competed together, and fight for the honor of International Memory Master.

The Finals was held in Sanya, Hainan in China. With pleasant weather and beautiful scenery, competitors had enjoyed themselves during their time in Sanya.

The results will be released and announce later. Thank you all for participating and supporting the Championships. Look for ward to seeing you all in the coming future.