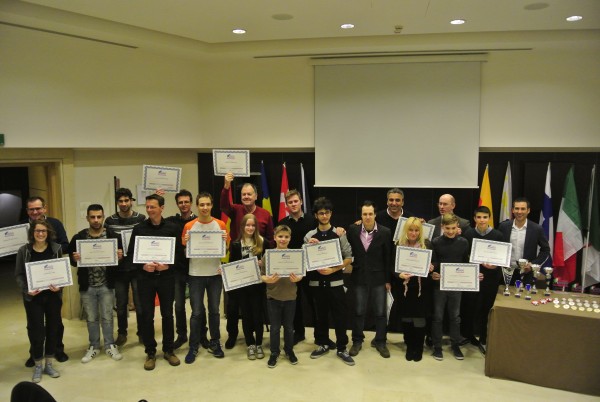 There are two divisions for the Italian Memory Championships
– Open division – open to competitors from all over the world
– National Division – For Italian citizens only
Titles are awarded for each division and the events are run around the same time each year in March.
For more information contact your  host  Matteo Salvo

Results for the 2014 National Division
There were 6 Italian Competitors overall
3 Adults
2 Junior
1 Kids
Congratulations to Mara Brescianini for winning the Italian National Memory Championship with 2159 points
and breaking the Italian record for 5 Minute Historic/Future Dates – 28 dates
and for breaking her own record for 15 minute Abstract Images with a new score of 120 points. 6 Personal Bests in Total
Second place went to Simone Rosati 1273 points – First time at a National Championship and 7 Personal Bests overall
Third place to Junior Gianni Calovi 1175 points – at his first ever championship
(see All World and National Records)
—————-
Results for the 2014 Open Division
The OPEN Division had 12 competitors from 6 Countries
1 Algeria
1 Denmark
1 Finland
2 Germany
6 Italy
1 Sweden
Congratulations to Simon REINHARD GMM IGM for winning the overall event with a score of 6503
2nd Jonas von ESSEN WMChampion 5873
3rd Boris Nikolai KONRAD GMM IGM 4397
Also congrats to Boris who scored a personal best 601 digits for 5 Minute Binary.
Congratulations to Joona Aapeli MARJAKANGAS IMM GMM (4th overall) who represented Finland in a National Competition for the first time whereby setting 5 brand new records and beat 3 of his own records and one other record.
He now holds ALL records for Finland for all current disciplines.
Congratulations to Søren Damtoft for breaking the Danish record for 5 minutes words (38 words) and a personal best in 15 minute numbers (300 digits)
Congratulations to Amir Khaled LOUAAR who achieved 4 personal bests. (5 and 15 minute Numbers, 5 Minute Random Words and Historic/Future Dates)

A HUGE thanks to Phil Chambers for all his amazing support  and to everyone else who supports those who support the event!! Great Job!

Results for the 2013 National Division

Congrats to Matteo Salvo, Phil Chambers and the team for making the first ever Italian Memory Championships such a success.

Winner was Ms. Mara Bresciani – not only did she compete for the first time, but won the National Event!!

We welcomed to Francesco Fisoni, Dott. Giuliano Migliarini, Matteo Di Cianni and Paolo Carnicelli to the sport of Memory.

Results for the 2013 Open Division

Simon Reinhard GMM was pipped at the post – he set the new world record for 5 Minute Random Words at 118 words.

He was beaten by 1 word when Boris Nikolai Konrad, GMM beat his own world record of 114 words with a score of 119 words.

Johannes also beat his own World Record for Abstract Images from 434 points to 440 points.

and increased his French records for
– 5 Minute Random Words to 32 words
– 15 minute Abstract Images to 130 points
– Speed Cards to 99.93 seconds

The Italian Memory Championships are usually held the last weekend in March and is open to all.

For more information on competing at the event, email matteo.salvo@matteosalvo.com