Day One of the World Memory Championships

After Completion of Names and Faces, Binary Numbers and Hour Number 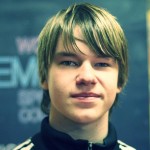 Alex Mullen USA is in Silver

The top three have opened up a massive four hundred point gap before fourth placed and the remaining field.

A key objective of the World Memory Championship is to test, ‎stretch and identify the limits-if ANY- of the Human Brain. At a DAY ONE evening dinner  gathering of sponsors,organisers and World Memory Sports Council Officials on a luxury   Dinner Cruiser along  the illuminated main Chengdu river, President of the Organising Committee Professor Tony Buzan announced shattered records  to ecstatic applause:

Marwin Wallonius of Sweden has annihilated the previous World record for binary numbers, ‎on this occasion breaking the hitherto -thought by some  to be impossible  – : 5000 barrier.

Meanwhile, Alex ‎Mullen ,rising star from USA , soared  past the previous record to score 3029 in the HOUR NUMBER discipline.

Will these be the first of Many in Chengdu, with its World Record entry for the WMSC, to present officially ,according to  its new authorised Mandate, to the Guinness book of World Records?

As dignitaries, workers and Vips of WMSC, including their Serene Highnesses Prince Marek and Princess Petrina Kasperski ,cruised at night  past the shimmering river fountains in front of the  illuminated Hengda Hotel and Conference Centre, memories of previous towering crenellations of Global Mental Literacy were evoked. Just as the Veen Island Palace  of revolutionary sixteenth century Astronomer Tycho Brahe was known as Uranieborg, the fortress of the stars, so Hengda will go down in the annals of WMC co Founder Professor Tony Buzan’s ongoing quest for Global Mental literacy as:

THE FORTRESS OF THE BRAIN.

May the Games Continue!!