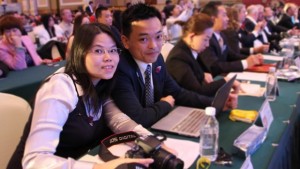 To keep up his memorizing chops, Andy Fong memorizes the dictionary. His wife, Angel Lai, is the 2012 champion of the Canadian Memory Championships.

They are two of a small number of Nova Scotia-educated talents who have achieved high marks in the field of memory sports.

The two met at Halifax West High School, graduated from electrical and computer engineering at Dalhousie University, and live in Hong Kong, where they run a memory training school.

They are also arbiters at the International Memory Championships.

Many levels of memory mastery

“We learned the memory technique together, and we went to the competition together, so it’s a pretty amazing journey for both of us.”

Once you meet these basic requirements, judges look at your overall score. Those who complete the tasks in the least time earn the title International Grand Master of Memory.

Memory sports and competition are growing in popularity around the world. Fong says one reason, at least in China, is many exams there rely on the student’s ability to memorize.

But he says having a good memory isn’t just good for getting good marks. “The memory sports actually help the brain stay healthy.”

There are currently only two people from Canada who are included in the world memory ranking system, and Fong says he’d like to see more Canadians compete in the World Memory Championships.

But Fong says not many Canadian schools teach memory skills, and not many of the major international competitions take place in North America.

“It’s kind of like magic … if you don’t know what it is. But once you know you’re capable to memorize that much you’ll find yourself more confident and you’re more willing to study and learn more because there’s no limit on how many things you can memorize.”

The couple says maybe someday when they have children they’ll move back to Halifax to open a memory training school.